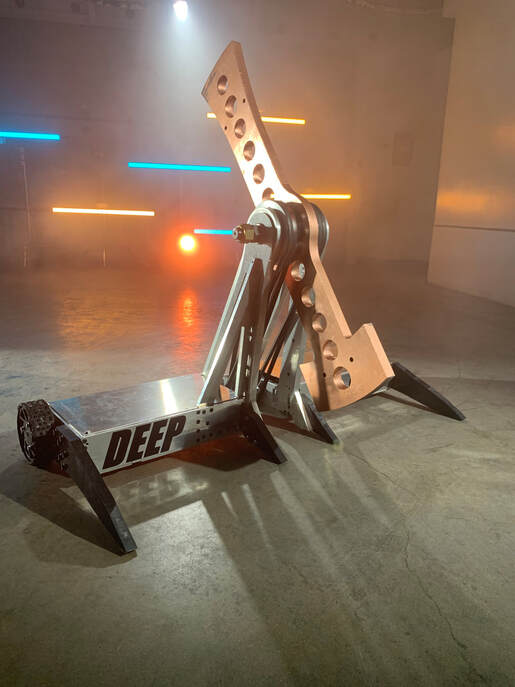 Our rookie season is in the books and we went home with a positive win-loss record at 2 - 1.  This was not enough to have us placed in the Top 16 Championship bracket, but we are going to be there in 2020!

We will be updating with a full season report soon.

Hello! We've got some explaining to do. There are a lot of things to unravel about the test box footage the was shown from EP1. As you all probably know each Battlebot has to pass a safety inspection prior before they are able to compete in the tournament. This was Deep Six’s first time in the test box, and it was very early compared to most of the robots at the competition. Our plan was to get through our safety testing as quickly as possible so we could address the other issues with the robot (cough cough WEIGHT). In our rush to get through safety we just taped the cover on the robot… and you probably know the why this was a bad idea now. At the time we had no idea how bad the stability would really be with our weapon spinning at full speed. With a robot this dangerous testing the complete robot at home was out of the question.

So what happened? The funny thing is that when that fateful impact occurred, the Discovery Channel cameraman that was filming our test had actually turned away and missed Deep Six's self destruction on camera! Everything that you saw during the clip was filmed by our team member Andrew on his smart phone! We were able to use this footage to analyze in slow motion the tipping and came to our own conclusions about what happened during the now infamous test. From what we saw our fate was sealed like so many other competitors’ favorite talking point: the floor (or in this case, the paint)! From the inception of Deep Six we knew our drivetrain would be overpowered; our brushless motor system puts out up to 20+ horsepower, and that is more than some of our pushy bot competitors. Tell that to your friend next time they say Deep Six is all-weapon. This strong drivetrain, combined with our high center of gravity, made Deep Six perform a wheelie every time we accelerated forward.

Our testing at home before the tournament was limited to driving around the driveway with a non-spinning weapon, which left us with no idea what to expect in the test box. To make a long story short, if you have a gigantic weight that is stationary and static on top of your robot, it becomes part of the robots total rotational mass. This is why when we did drive tests at home with the weapon stationary, it increased the moment of inertia of the entire robot, and we only popped small wheelies. With the weapon spinning, it completely changed the driving characteristic of the robot (duh). When that huge mass spins, it completely subtracts the huge moment provided by the weight of the weapon bar. When we were gyro’d up onto our left wheel, I pushed too hard on the throttle and Deep Six literally tipped backwards from our strong traction on the floor. That's it. We just fell backwards. And felt very stupid. This was the point we regretted only taping the top armor on. Not only was it tape, but it was painters tape, and thats the weakest of all the tapes!

​     How much damage did we suffer? Practically none. The LiPo batteries that were ejected from the robot had to be scrapped, but surprisingly those were the only internal components we lost. I guarantee that we would have had no damage whatsoever if we had our top panels bolted on properly. The inside of Deep Six is essentially foam padding with some electronic goodies packed in the spaces, and we rely on the top armor to keep those components in. The aftermath? The Battlebots crew were certainly upset at us. We punched a huge hole in the floor panel and actually blew out the bottom of that test box. This did nothing to convince them that we would be a competitive and interesting robot to see compete on television. We had to convince the production crew that we were a worthy robot to compete in Battlebox and not just destroy it. What was our solution? You're going to have to wait until our first fight airs to see how we adapt and what happens!! 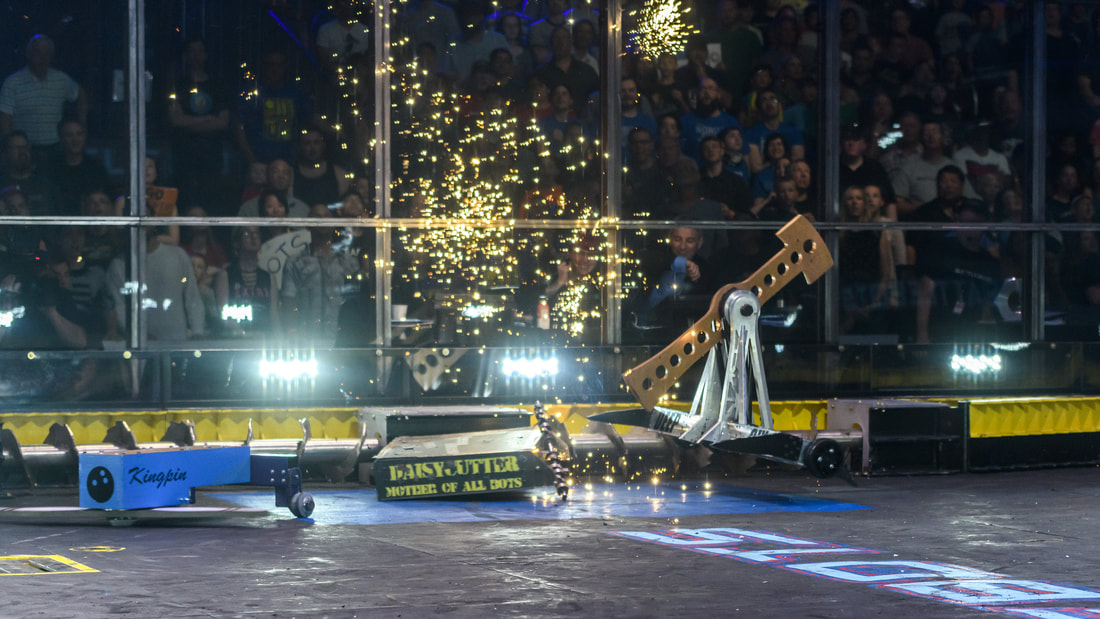 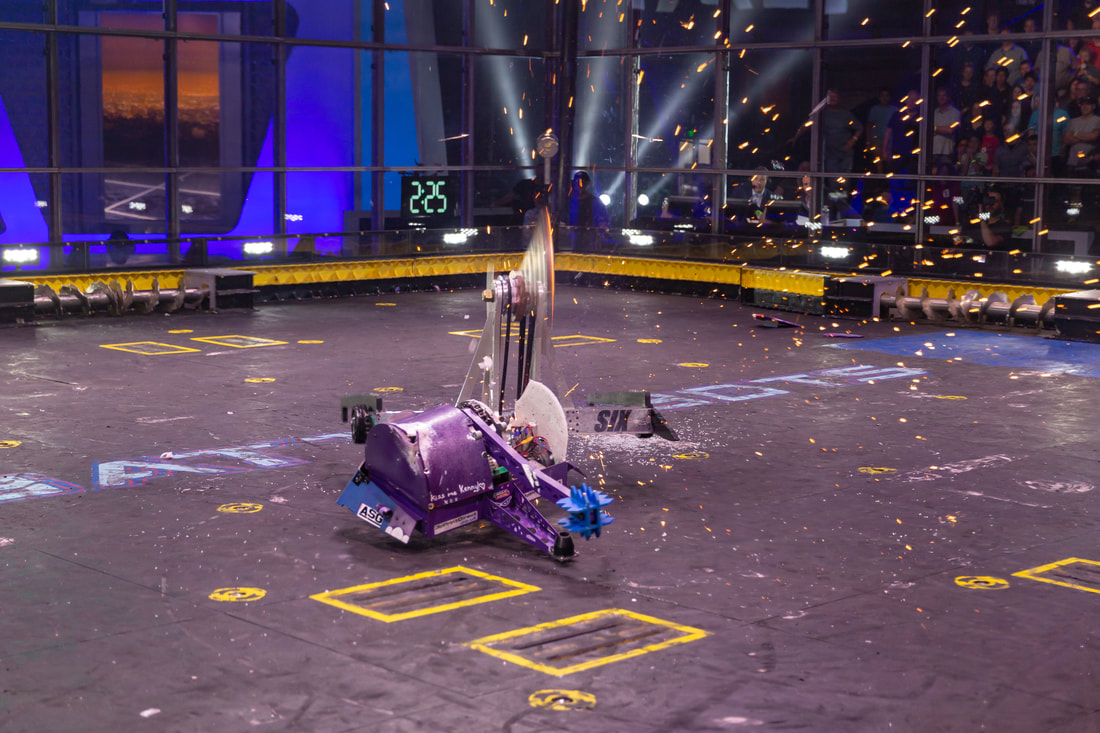 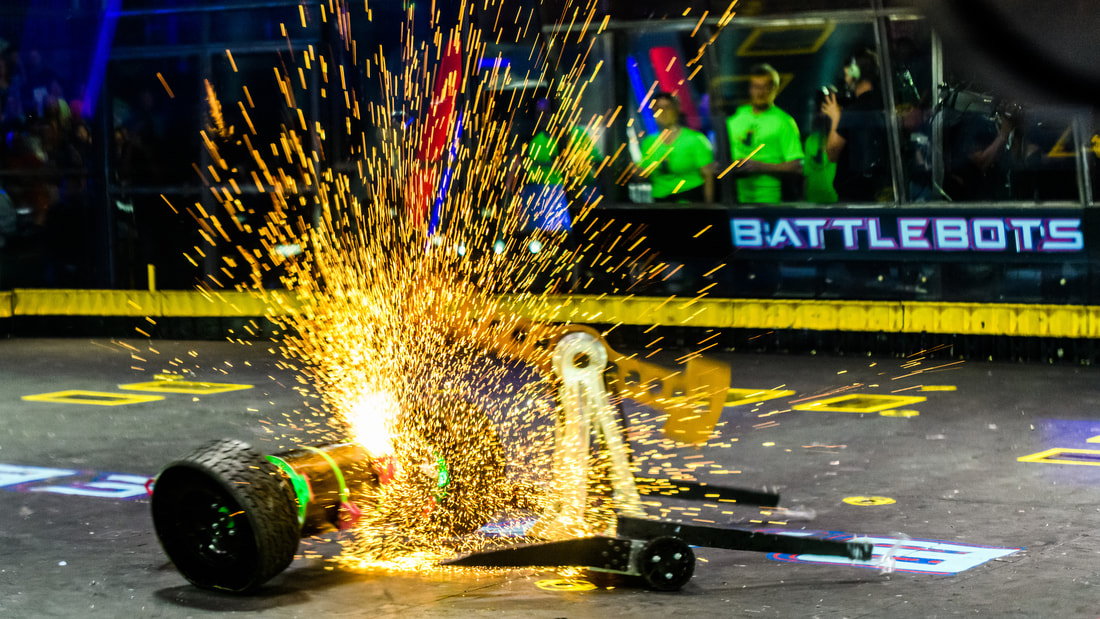